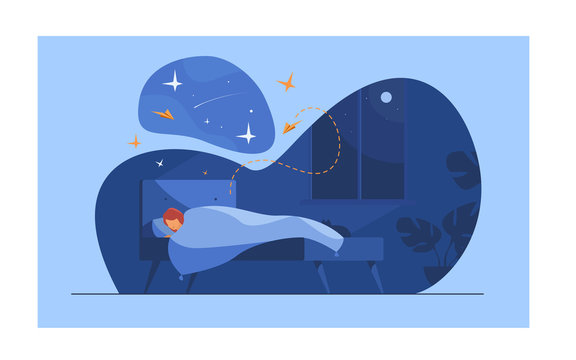 Sleep is an important and essential part of our lives. It rejuvenates us from all the fatigue. However, sleep is a very complex phenomenon. It mainly consists of alternating phases of the rapid eye movement (REM) and the non-eye eye (NREM) phase. The NREM is the first phase of sleep and consists of three phases followed by REM sleep. The first stage of NREM sleep lasts only for the initial ten minutes when we start falling asleep. Muscle activity and eye movement start slowing down. The second and third stages are those of deep sleep. The brain waves become slower, and during stage 3, there is the presence of delta waves. This is followed by REM sleep, during which brain activity is the same as that in the awakened state. It is characterized by heavy breathing, an increased heart rate, rapid eye movement, and muscle atonia.

Anatomical regions of the brain involved in sleep and wakefulness:

This region plays a primary role in promoting cortical activity due to the activity of the cholinergic neurons during wake and REM sleep. It has a number of inputs from the hypothalamus and brainstem. It also acts as a relay system between the afferent neurons of the reticular activating system to the cortex.

Neurotransmitters in this area include glutamate, vesicular glutamate transporter 3, and gamma-aminobutyric acid (GABA). It is this heterogeneity that makes it involved in both sleep and wakefulness.

It is formed from a group of neurons that extend from the medulla to the posterior hypothalamus. It receives afferent neurons from various sensory organs and sends excitatory signals to the basal forebrain, hypothalamus, and thalamus. It plays a major role in wakefulness.

It has the ability to modulate the sleep-wake cycle. It acts as a relay center for the input of glutamatergic neurons to the cortex.

The lateral part of the hypothalamus is the only region that has two arousal-promoting neurons – hypocretin 1 and 2. The tuberomammillary nucleus(TMN, the only centre in the brain for the release of histamine, a wake-promoting substance) is present in the posterior part of the hypothalamus. This nucleus receives excitatory inputs from the hypocretin(or orexin)- containing neurons as well as GABAergic inhibitory connections from the neurons containing melanin-concentrating hormones(MCH). The slow and graded discharge of histamine from the histaminergic neurons of the TMN induces and maintains wakefulness. Light can induce the silencing of these neurons, which leads to the rapid generation of slow-wave sleep.

The preoptic area(ventrolateral and median) in the hypothalamus contains neurons that can inhibit the arousal-promoting neurons with the help of GABA and galanin. These arousal-inhibiting neurons function most actively during REM and NREM sleep states. According to a study published in The Journal of Neuroscience, lesions in the ventrolateral preoptic area reduce sleep and affect the normal sleep of an individual.

Proposed models of Neurobiology of Wakefulness and Sleep:

The neurotransmitters involved in inducing and maintaining wakefulness are a part of the ascending arousal system. These include orexin, norepinephrine, acetylcholine, serotonin, histamine, etc. There are two main pathways present in the lateral hypothalamus that cause arousal. These include:

The normal human sleep cycle is constituted by alternating phases of REM and NREM sleep. During this period, the ascending arousal system is inhibited by GABA and galanin via the ventrolateral preoptic area(VLPO). The VLPO has two groups of neurons that are involved in sleep:

The VLPO and MNPO hypothalamic neurons majorly contribute to NREM sleep. These neurons are inactive during the awakened state and discharge preferentially during NREM sleep. The basal forebrain and the lateral hypothalamus also play a role in this through GABAergic neuromodulation. In this pathway, the VLPO sends the inhibitory signals to the monoaminergic system(histaminergic neurons of the tuberomammillary nucleus) and the orexinergic neurons(of the lateral hypothalamus). The VLPO also receives weak mutual inhibitory signals from the arousal systems during this stage.

The cholinergic excitatory neurons extend from the laterodorsal tegmental nucleus and the pedunculopontine tegmental nucleus to the reticular pontine formation, thereby promoting sleep. The activity of the neurons of the sublaterodorsal nucleus plays a role in muscle atonia, which is a characteristic of REM sleep. This is enhanced by the inhibitory projections of the ventrolateral medulla to the glycinergic spinal motoneurons. There is a sudden increase in muscle activity(twitches) in association with rapid eye movement. This is because of the motor neurons which send out glutaminergic excitatory outputs during activation of the central nervous system.

The internal clock of our body also plays a major role in sleep and wakefulness. The circadian rhythm has two main processes – Process C and Process S. When Process S reaches its threshold, it induces sleep and the state of wakefulness prevails when it reaches its minimum intensity. NREM sleep is regarded as the principal marker of Process S. Process C denotes the sleep pattern during the 24-hour cycle.

Although an internal clock runs in every cell of the body, it is only the suprachiasmatic nucleus that has the ability to directly receive light cues from the external environment and synchronize it with our internal clock. The neurons of the SCN nucleus are increased when one is awake and in REM sleep while its activity decreases during NREM sleep. There are several genes and their transcription factors that are involved in this namely:

CLOCK and BMAL1 – the activating genes

PER and CRY – repressing genes

Hence, we conclude that the integrated efforts of the various pathways, neurotransmitters, hormones, and nuclei are necessary for good sleep. It requires the combined effort of our nervous system as well as the surrounding environment for a person to enjoy a good sleep. The thalamus, hypothalamus, pons, pituitary gland, etc, are a few parts of the brain that are involved in the regulation and maintenance of sleep by the release of neurotransmitters in the right amounts at the right time. The maintenance of the internal body clock i.e., the circadian rhythm becomes very important. At an individual level, people need to take care of their mental and physical health such that their internal system is responsive to the external cues that induce sleep.